This summer I was honored to become one of the three 2015 Science Hack Day Global Ambassadors. I travelled to San Francisco, USA at the end of October to attend the event and bring the idea back home. Now in the middle of my "ambassador duties" I want to answer the question "Why Science Hack Day isn't an ordinary hackathon?" (by doing a late report on SHD SF).

What is Science Hack Day?

Science Hack Day is a two-day-all-night event where anyone excited about making weird, silly or serious things with science comes together in the same physical space to see what they can prototype within 24 consecutive hours.

This is the definition from the official website, where I emphasized the word anyone. There are no limits who can come and what should be made (except to be sciency). From my experience, other hackathons are strictly limited to coding (and hardware programming). You can make a website about space, analyze the best way to play pool, help Hogwarts by designing a new sorting hat for them, make an educational board game about coral reefs, or anything else. 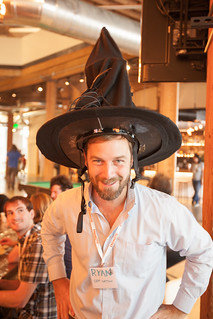 You need no scientific background, experience or other previous knowledge, just curiosity and maybe an idea. Of course it’s good to have a scientist to help you with ideas and information, a developer to help you write a few lines of code, and an artist to paint your hardware hack case. The main emphasis is not on competition but on collaboration and having fun.

Science Hack Day is an international idea with more than 60 events that took place in over 20 countries on all continents (except Antarctica). I’m one of this years’ global ambassadors which means I should organize SHD in Ljubljana next year. So far it looks we’re on a good track.

It all started Saturday morning at the awesome GitHub HQ in San Francisco. I arrived quite early with other ambassadors as we weren’t sure what’s the weekend traffic like in SF. While enjoying my personalized omelette, I started chatting with other people to see what’s their background and what they want to do over the weekend.

After the introductory talks, lightning science talks and ideas pitching, I started looking for a team. This was my first hackathon where I attended on my own. I then discovered one of my favorites about SHD - collaborative playground about science. I wandered around, talked with people about the ideas that interested me and everyone was willing to accept me into their team. I could even join more teams! I eventually joined Alex to work on sunspot data, but more on that later.

Over the weekend each team worked on their projects, but it was completely normal to go around, as someone what he or she is doing, try using a tool or device or just chit-chat about our lives and science. A light atmosphere was present throughout the event.

The final beauty of SHD showed at the award ceremony. There are no rewards, just symbolic science medals, the same for all categories. The latter aren’t even fixed. The jury can make their own categories depending on the ideas presented. For me personally, all ideas that were realized at least a little are winners - it’s more important to learn something new, make something smart, or just have fun and play with science.

I joined Alex Parker, one of the brains behind the New Horizons mission to Pluto. We tried to align, cleanup and animate daily hand-made sunspot drawings from Mount Wilson observatory in California, spanning almost 100 years in the past. The project was first intended to be Century of the Sun, but the task was too demanding. Even when Stephanie joined us on Sunday, we could only basically process the data from 2000 onwards. You can see the result below.

The idea got use “Best use of data” award at the end. We all hope that we can find some time and continue working on the idea, probably by turning it into a citizen science project to help us overcome some of the obstacles.

Now, Science Hack Day is coming to Ljubljana, Slovenia. A fixed date and venue should be known soon. I hope I will successfully bring the idea for fun, interesting and possibly weird collaboration in science to my country, and show that science can be for everyone.

Attending SHD San Francisco was a great experience unlike other hackathons. Come to a Science Hack Day near you or join me next year in Ljubljana!